5 Keys to Starting Over with Style 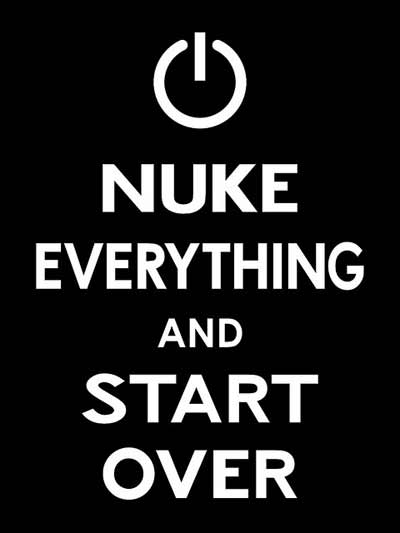 Today All Groan Up is honored to welcome the wise and hilarious Jessica Minyard to the stage. Jessica is an aspiring YA and children’s book author who likes to talk about herself in third person. She’s also pretty hilarious. You can find her on Twitter or musing at her website.

So I’ve been thinking about life lately. Specifically my life. Where I’m at now, where I’m headed, where I want to be.

This time last year I had just started what I like to call my first “Big Girl Job”. I wasn’t slicing meat, frying chicken, or setting a 4 AM alarm. I was also living blissfully rent-free in an apartment with a good friend from high school (stuff like this never happens to me). After a heart-wrenching five-month frantic job search right after college (I was young. I was educated. I was hirable. I was quickly disillusioned) I was finally in a good spot. I was going places.

After discovering that there were fundamental differences between my boss and I that we couldn’t overcome, I had to leave (this is a gross understatement of a really long story with a fabulously dramatic ending). I’m homeless. My friend moved out of state and with her our comfy apartment deal.

This all happened within the same month, and at this point, it was very hard not to go lie out in the middle of the road and let life run me over. This was not the vision. This was not in the script. This is not where I was supposed to be at twenty-three.

The first round of job hunting was daunting enough – and that was when I was fresh-faced and inspired straight out of school. This time, it’s brutal. It’s disheartening. When you’ve got your college diploma staring at you every night before you go to bed it makes you wonder: What was it all for? What the hell am I doing?

Starting over again is a demoralizing task. It would be easy to mope on the couch all day eating frosting out of a jar and watching Castle marathons and not washing your hair.

It would be easy to be depressed and unhappy and give up. But that’s not what we – as success-minded twenty-somethings – do.

Here’s how I’m coping and starting over with style.

5 Keys to Starting Over with Style

1. Lean on your support system.

You’re going to have friends and family who love you unconditionally and support your decisions. Find these people. Surround yourself with these people. They’ve got your back. Fortunately, my parents have the means and good will to re-nest their eldest daughter (after they thought she’d flown the coop) and her 60lb mutt puppy. Henceforth, they shall only be known as the older roommates who live above my subterranean studio space.

Your 20’s are reserved for risky choices, but that doesn’t mean you don’t have to have a plan B…and C and D and E. The decision to quit my job wasn’t made in haste. I took the time to think about what my next steps would be. Thanks to my support system I had a place to live and didn’t have to stay in a job that wasn’t taking care of me. It’s been about a month since that fateful day and I’ve gone from no job to two jobs and have scoped out a schmancy internship for the quickly approaching 2013.

Our generation is obsessively tied to our social medias. It’s easier than ever to keep tabs on friends, family, acquaintances, co-workers, frenemies, and exes. Hop on Facebook real quick and you can see everybody’s new relationships, engagements, marriages, babies, promotions, fancy cars and gadgets, what cool concerts they’re attending, and a whole bunch of other stuff you’d really rather not know right now.

It’s easy to lose yourself in everybody else’s success, comparing their lives to your own. This is a detrimental, frustrating habit and the end result is you feeling like useless crap. Stop. Comparing. The snippets on Facebook and Twitter are people’s highlight reels; we rarely see the bigger picture behind the constant “I love my life” status updates. So stop stressing about the glamorous profile of your second-cousin’s mom’s best friend from the third grade. It’s probably fake anyway.

My mom always told me that there are enough people in this world who are willing to be mean to you and put you down (that’s why I had to be nice to my sister). And you know what? She’s right. There is always going to be someone in your hater club, but that someone should not be you. Yeah, okay, so you fell down the metaphorical ladder and have to start again at the bottom. Get back up, keep climbing, and keep the self-love coming because you’re awesome. End of story.

I’ve often lamented the fact that I didn’t major in something practical in college. Some field that would guarantee a job. Of course, this was only after I’d graduated and discovered that Creative Writing majors were not in high demand, and “Bestselling Author: Please Apply”, was not listed in any help wanted ad. Durn those silly parents that let me do what I wanted!

So, now that you’re forced to start over, it’s a perfect time to think about your priorities. Before, I was so consumed with finding a good job that I became complacent. There were many times I considered giving up on my dream and being content with my life as an 8-5er. But that was a sacrifice I wasn’t willing to make. I’m not willing to settle for just a job, when I want so much more, and neither should you.
—