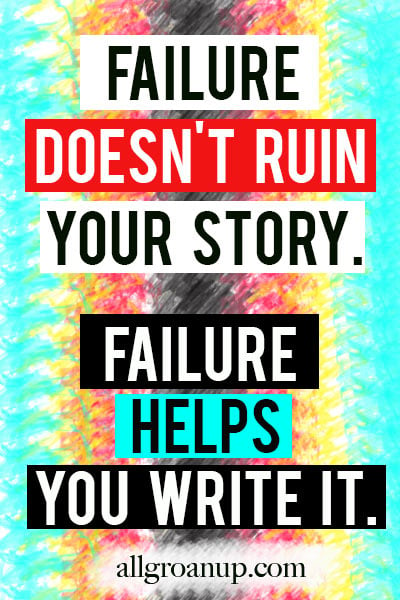 “The person who fails the most, wins.” – Seth Godin

Failing feels like stocking a refrigerator that’s not plugged in. You think you’re preparing for a feast, and then you wake up to find a reeking fiasco.

For me personally, there were many years in my twenties that smelled like that Gouda gone bad.

Seriously nothing worked out like it was “supposed to.” Not one little thing.

Jobs I was excited to apply for never called me back. People I was excited to meet and connect with, didn’t return emails. And then my passion to become an author was met with a resounding and overwhelming no.

I felt Tin-Canned. Getting crushed and recycled after I poured out everything I had within me.

Yet, I look back now at all the failure that I thought was wrecking my story and see now how failure was actually leading me exactly where I needed to go.

Failure doesn’t ruin your story. Failure helps you write it. (Want to tweet that?)

I am incredibly thankful now for the many years in my twenties that didn’t go according to plan. Here’s why you should reconsider the power of failure too.

Amazing inventions that we depend on today were birthed from utter failure.

Spencer Silver was searching for an industrial strength glue that would put others to shame, but found that his glue barely even held! And strangely didn’t leave a residue. So Spencer changed his vision and his goals, and said hello to Post-It Notes.

Doctor John Harvey left his wheat boiling too long on the stove and instead of throwing it away, toasted the mush and wala – Corn Flakes!

Scientist Alexander Fleming was trying to invent the new wonder drug, and only after he threw his failed experiments away and mold began to grow, did he realize that the mold was killing the bacteria in the petri dish. Mold in the trash became Penicilin.

Mold growing on top of an epic failure became his greatest achievement.

You never know what amazing innovation and opportunity might be birthed only by an epic failure. But you have to keep staring at it and looking for new opportunities that you were not initially looking for.

When you fail you have two options – quit or find another way.

Failure forced me to learn more. Grow more. Be more. I wanted the easy path, but by being forced to take the long way I became stronger. I learned skills as a writer, blogger, web programmer, web designer, photographer, social media specialist, marketing specialist, speaker, networker, etc… And the best, I learned how to be a better writer!

Failure is like the coach telling you “that’s not good enough.” And we all have a choice in that moment to quit or hear those words and try to do it better

Many walls will halt you on your path to success. But it’s only a dead-end if you turn around.

When your home goes up in flames, you are forced to explore the strange lands around you. How many great explorers only became that way because of utter failure or persecution in their home lands. The United States was settled by a bunch of “failures” who didn’t fit in. 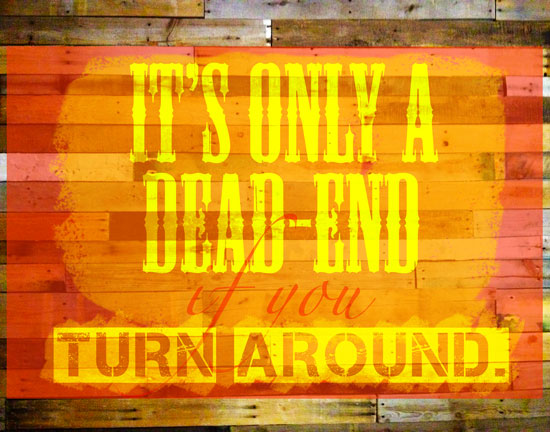 Photo and design by Paul Angone

For years, I dreamed of being a sports broadcaster. I loved sports and I loved talking. And didn’t mind the idea of being paid well and being on camera.

After years of dreaming I took a giant step towards my dream by landing an internship at CBS Sports! It was my dream come true.

And after a month, I absolutely hated it.

I loved the sexiness of being on TV, but didn’t want to do what it takes to actually be on TV.

The internship was a failure, but it was a giant success in that it clarified my vision, making me hone in further on the things I find important.

Maybe you’re failing at something you thought was your dream so that you can find your passion.

The biggest failure of our lives would be if we never had any.