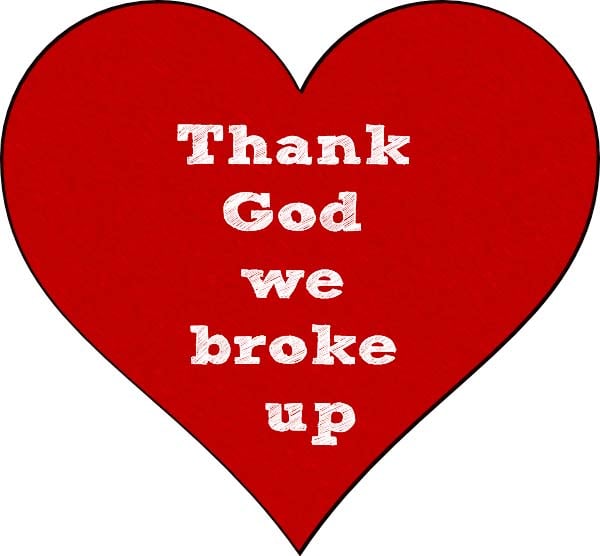 Staying in a bad relationship is like letting your heart lay in the sun too long and then being surprised when it burns.

But that doesn’t mean that breaking up is any less difficult.

But now when I look back, I know that while breaking up is extremely painful, it’s the best thing that could’ve happened.

Breaking up is not like removing a Band-aid, one quick painful pull and it’s over.

Breaking up is like getting stitches without painkillers – each stitch incredibly excruciating, yet vital to closing up the wound.

Obviously if something is killing you, you have it removed, right? But surgery isn’t always that simple and straight-forward. You’re probably going to feel more acute pain after the surgery than before.

Sure when you’re plastered on the couch, tears coming from your tears, you’ll wonder how God could allow you to feel so much pain.

But you’re on the path towards health.

Sometimes it’s only when you have pieces cut from you that you can become whole.

2.   The person you swore was the One, was not even in the Top Ten.

As I was experiencing the waves and wind of a hard break up, I’ll never forget the advice my good friend Josh gave me.

“Paul, just think. If you thought this was the One, just think how awesome the actual person you’re going to marry must be. The story doesn’t end here. God has something better in mind.”

And now every single day, Josh’s words ring true. Every day with my wife is a daily crescendo of amazing.

Breaking up is like a fire. It destroys. A lot. But sometimes it’s beneficial and necessary. Especially if it’s controlled. Like a farmer taking a field overgrown with weeds and setting fire to the overgrowth.

“Fire is a natural and necessary contributor to habitat vitality and renewal. Many plant species in naturally fire-affected environments require fire to germinate, to establish, or to reproduce.” Wikipedia

If you allow the fire of a breakup to burn through the overgrowth and dead weeds in your life, the plants that will grow back will reap tons of sweet fruit.

Sometimes life must suck before it’s sweet. The pain of breakups have produced some of the most beautiful movies, songs, and pieces of artwork that exist on earth. There is a certain kind of clarity and creativity that comes from the fire of a breakup.

How has a break up been good to you?