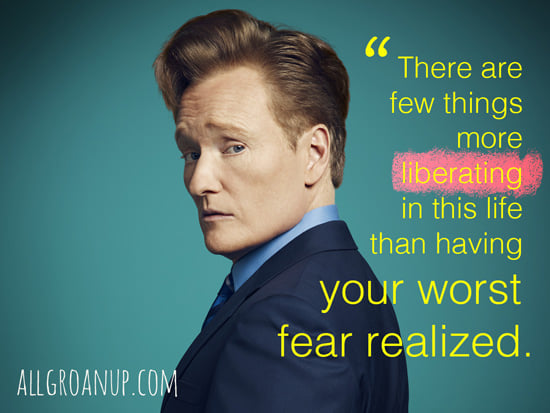 Do you remember when Conan O’Brien took over for Jay Leno as the host of The Tonight Show? It was Conan’s dream come true, something he’d worked towards for 16 years as the Late Night host after Leno.

Then in seven months, Conan was gone. Replaced by Jay Leno. Sending Conan into a yearlong desert experience where everything he’d been working towards vanished.

It was Conan O’Brien’s worst fear realized, and yet, it was also his catalyst to some of his greatest successes.

As Conan explained in a college graduation speech at Cornell University after his fall-out with The Tonight Show:

There are few things more liberating in this life than having your worst fear realized. It is our failure to become our perceived ideal that ultimately defines us and makes us unique. Your perceived failure can become a catalyst for profound reinvention. Disappointment will come. The beauty is that through disappointment you can gain clarity, and with clarity comes conviction and true originality.”

Having your worst fears realized can actually be the best thing to happen to you.

Because you quickly realize that the worst outcome you could possibly realize, wasn’t actually as bad as you thought.

In my own story, I know this truth all too well. I tried for years and years to get a book published. The worst thing I could’ve imagined was every publisher saying no. Well, after numerous “we like the book, but…” it became fairly clear that my worst fear was curling up in my lap and not going anywhere.

Basically, a publisher saying yes to me as an insecure 23-year-old would’ve been the worst thing to happen to me, not the other way around.

So as you take steps towards your dream — ask yourself, “What’s the worst that can happen.”

Usually our worst fears are not nearly as terrifying as we make them.

Once they happen, we actually realize they were the exact catalyst we needed. Our worst fears were actually the secret sauce to making us become better and do better work.

So if you’re sitting in front of an email you’re scared to send, a project you’re nervous to start, a relationship you’re thinking of pursuing – what’s the worst that can happen? It not working out? Well, it’s for sure not going to happen if you don’t try.

The actual worst thing that can happen is you not giving it a shot at all. That would be the worst. Not a failed outcome. The worst is floating aimlessly in the black abyss of never trying and never knowing. That’s the scariest place to exist.

When the box you’ve placed yourself in shatters, after the initial trauma wears off, you realize there was a whole other world out there. Waiting for you to step into. You just needed something to smash it open. And usher you in.