The Real Risk of Embarrassment 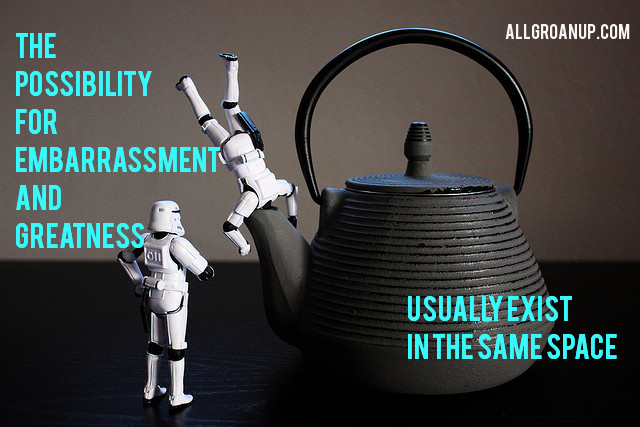 I hate being embarrassed.

But all the time, effort, energy that I’ve spent trying to avoid embarrassment — have I just kept myself from actually being myself? How many opportunities have I missed?

Who Wants a Free Guitar?

Example — 4th of July  three years ago at a park in San Diego. I heard music playing on the far side, so I rode my bike to find a Beach Boys cover band up on stage playing to a crowd of about 500 people. I’d stood there no more than three minutes when the band made an announcement:

“This will be our last song. We need five volunteers to come on stage and play some air guitar. The crowd will vote on the best performance with the winner getting this!” The lead singer held up a beautiful white Les Paul guitar. “First five that make it up front, make it on stage!”

I couldn’t have pulled up at a better time as I had a 50 foot head start on anyone in the crowd. People began to stand. A few started to run. I took two steps. Then froze. I looked at the size of the crowd. Anxiety rushed through me like Mountain Dew.

Making a fool of myself for a free guitar? Was it worth it?

I didn’t know a soul in the crowd. Get me on stage and I’ll come alive and put on a show. But that takes me getting on stage.

I deliberated. I debated. And by the time I slowly sauntered over, they had chosen the five.

I missed the moment.

I then watched the five who made it on stage give half-hearted, lame attempts at air-guitar — their fear of embarrassment making it embarrassing. I felt sick. That guitar could’ve been mine.

But you have to be on the stage to win. They weren’t going to give the guitar to the bystander in the front row who swore he could’ve done better.

The possibility for embarrassment and greatness, usually exist in the same space. It’s difficult to remove one and not the other. When you do, you exist in the middle. Mediocrity your brand. No one saying a thing about you — good or bad. Why would they?

That’s where I’ve existed most days. How many moments have I lived in a sterile, white-walled existence where my perceived appearance is the wild card that trumps all?

Well freaking nuts to that.

What question am I most afraid of?

What’s my most embarrassing moment?

People love laughing when sharing their most embarrassing story.

I haven’t heard too many snickers when people are sharing their biggest regrets.

The Fear of Embarrassment Kills

The fear of embarrassment poisons creativity.

The fear of embarrassment mitigates risk.

The fear of embarrassment lets insecurities call the shots.

The fear of embarrassment feeds our obsessive comparison disorder. Embarrassment thrives like a fungus in the petri dish of “what will others will think?”

Damn what others think.

Let them exist in the middle.

I want my guitar.