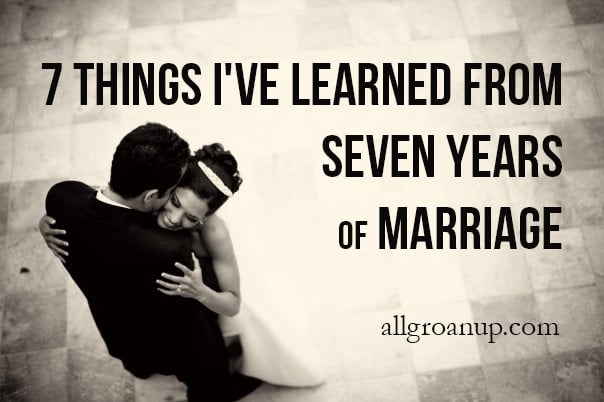 “If I get married, I want to be very married.” – Audrey Hepburn

In my single days, I remember looking at the smiling couple saying their “I Do’s” and thinking to myself, “Wow there’s two people that have it figured out.”

Then I got married. And realized that I didn’t have a clue.

As I write in All Groan Up: Searching For Self, Faith, and a Freaking Job!:

Men are taught to be strong, brave, and always in control. Then you find yourself holding up a tiny little ring, like a five-year-old who found a prize in his cereal, asking a girl to take it and hold onto it forever.

On one hand, you hold that ring, overcome with terror that you’ve greatly misread all the signs that led you to thinking this was a good idea. On the other hand, you’re also slightly terrified that if she says yes, you’re going to have to pretend like you know what to do next! When it took all your mental fortitude just to make it to “will you marry me?”

Now seven years in, my wife and I have learned a few things. While anything but “marriage experts” (find me someone claiming to be a “marriage expert” and I’ll find you a pathological liar), my wife and I have been asked to share our marriage story and insight in a marriage and parenting DVD series that we are flying across the country to film soon.

As we prepare and think back on our seven years of marriage, here are seven of the most important things we’ve learned.

In our first year of marriage, I think some of our most important conversations were talking about the kind of life and marriage we wanted to create together. I remember very clearly the night we wrote on our bedroom mirror “Paul and Naomi Inc.”

Our goal was to create together. To join forces. To work together as if we were business partners as well as spouses. We wanted to create an organic, flexible life working towards something bigger than both of us, and doing it together.

And now, the vision we had that first year of marriage is a reality. We’re fully working and breathing and living smack dab in the middle of “Paul and Naomi Inc” – building our business together. And now with two more collaborators — a three and four year old.

Whether you go as crazy full-tilt as us or not, one way or another: the most powerful part of your marriage is when it’s working together towards something bigger than your marriage.

I remember the first few years of marriage I felt like we were just kids playing “House” and my dad was going to show up at any moment to take his business jacket off my shoulders.

In a way we were playing house with just slightly different implications than when we were kids. There’s no textbook for husband and wife, no matter what new bestselling book tries to convince you otherwise.

Marriage doesn’t just define you, you also define it.

If it feels like you’re playing House, it’s because there should be healthy amounts of exploration, creativity, and unknowns that you’re trying to find solutions to.

You grow into growing up as your roots grow deeper together. Marriage doesn’t happen at your wedding. Marriage happens slowly during the thousands of days thereafter.

In marriage, at some points, in certain seasons, you must war. Not against each other, but for each other. As I wrote in 3 Things Love is Not – “In a relationship, you have to fight against everything that is trying to keep you fighting.”

When shrapnel is flying all around. When bullets are whizzing at you both. When everything is fighting against your marriage, you must fight for each other.

Your spouse must be your war-time ally. When the bullets start flying, will you protect each other’s backs or will you turn against each other?

As I wrote in 101 Secrets For Your Twenties,

No matter the justification you deliver that verbal knock-out blow with, when your relationship is lying unconscious on the floor that doesn’t mean you’ve won. No, actually quite the opposite.

Once your Verbal-Roundhouse Punch is thrown, it’s thrown. Just because you apologize and ask for it back, doesn’t mean your sledgehammer hasn’t already done its damage.

Bonus Tip: When you’re 100% sure it’s their fault, it’s pretty much a guarantee it’s more your fault than theirs.

In marriage, especially when kids come, you can feel a littletadbit crazy. Some of the most helpful marriage resources we’ve ever received is being a part of different couple’s groups where people are open, honest, and encourage each other.

Marriage is tough at times. Never talking about how tough it is, makes it that much harder.

“Love doesn’t just sit there, like a stone, it has to be made, like bread; remade all the time, made new.” – Ursula K. Le Guin, The Lathe of Heaven

While it’s great to get input, advice, and wisdom, you can’t be constantly measuring your marriage by what other people think about your marriage, even especially from your own family.

Your family is going to have their opinions on how to do marriage, raise kids, have a career – basically anything to do with living.

If you’re constantly looking to friends and family to tell you that you have a healthy marriage, or to consistently lament to them about everything what’s wrong with your marriage, then more things are wrong than you realize.

Day by day, life and time and to-do’s and struggles and hurts and strains and bad habits left untouched create rifts that grow over time.

As I wrote in 5 Myths About Marriage:

Marriages don’t fall apart because of one big compromise. They fall apart due to a thousand small ones. Like a windshield crack, the longer you drive on without addressing the issue, the more shattered your relationship will become.

Yet, when a crash happens. When glass is flying everywhere. When you feel suspended in air, spinning, and you don’t know which way is up. The most important thing you can do is find each other, grab hands, and just hold on to each other. Keep searching for each other, even if you don’t know exactly where you’re headed.