The Complete Audacity of Being Thankful (a powerful true story) 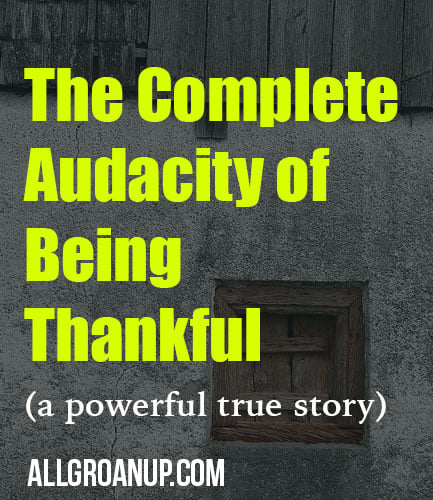 Two sisters entered their new home knowing all too well that they’d most likely be killed there. A horrific thought, but an honest one.

They entered into a massive room filled with rows and rows of wooden bunks stacked nearly to the ceiling with little room to walk in between. The windows throughout had large gaping holes where glass should’ve been– an unnerving sight considering it was the dead of winter.

As the two sisters climbed and crawled to their top bunk beds so high in the room it was like the ceiling was giving them a hug, they lay in their straw covered beds that reeked of urine and mold.

Corrie stared silently at the ceiling and wondered how she could survive a day in this Nazi concentration camp. Corrie and her sister Betsie were Dutch Christians, arrested for suspicion of harboring Jewish “fugitives”. An allegation that was definitely true, even if they never found any of the six people they hid in a secret, strategically constructed upstairs closet.

As Corrie pondered her fate, she felt something bite her. She popped out of bed, hitting her head on the wooden slates above. Corrie and her sister Betsie clamored down off their beds to escape. Their bodies covered with fleas.

“How can we live in such a place?” Corrie cried to her sister.

Everything taken from them, now living in one of the most horrific, evil places in history — their chance of survival was as likely as getting the guards to transport them to a penthouse suite. How were they going to make it?

Betsie had the answer, something she remembered from a Bible verse they had read that morning. She knew the only way they could make it. Her audacious survival strategy?

To give thanks. For everything about their new lives.

What in the world was there to be thankful for? Corrie asked quite understandably.

“That we were able to stay together here in this concentration camp.” Betsie replied.

“That we were able to smuggle the Bible that’s in your hands. And since we’re packed so tight in this room so many women will be able to hear us read it.”

Betsie looked at Corrie to join in giving thanks.

“And thank you God for the fleas…” Betsie responded.

The fleas! This was too much. “Betsie, there’s no way even God can make me thankful for the fleas.”

“Give thanks in all circumstances,” Betsie quoted. “It doesn’t say just in pleasant circumstances. Fleas are a part of the place God has put us in.”

Corrie was sure this time Betsie had officially lost her mind.

Months in Hell and The Unexpected Amazing

For weeks and months they worked and survived in a place that was just a quick escalator ride up from Hell itself.

Yet, an amazing thing began to happen.

Quite timidly, at nights while soup was being served, Corrie and Betsie started reading from their Bible aloud in the back of the massive dormitory room as women clamored around to listen.

They would read the Dutch text and then translate it to German, then listen as women repeated the words back through the crowd in French, Russian, Polish, and Czech. It was ripples of hope and light being spoken in a place all too absent of both.

With guards everywhere, Corrie and Betsie feared of being discovered and the horrific fate that would await them if they did. Yet, night after night they continued. The gatherings became so big that Corrie and Betsie held two church services a night in the dormitory. Women being filled with courage and strength to face what awaited them at 3:30am when they would be cattle-prodded out of bed for work duty.

How many lives were Corrie and Betsie saving?

Every night they feared a guard would discover them, yet it was like God put a protective force field around them like a talented Jedi knight.

Then one day while trying to settle a dispute in their dormitory room, Betise figured out what God’s protective force field was all along. She figured out what allowed them to carry out their illegal act of giving hope every night to women who were in desperate need of it.

The infestation of fleas.

No guard wanted to take a step in their room lest they get fleas themselves. As Betsie shared her news with Corrie, she couldn’t help but shine an “I told you so” smile. There was a reason to be thankful for the fleas.

Yet, it’s being thankful for the stuff we can’t see a good reason to be thankful for which might be the most transformative.

Because we don’t see the full picture. We can’t read our entire story from where we currently sit. We don’t know how the obstacles and turns and failures and confusion and setbacks and struggle are weaving together to create our future.

In my life, I often look back at past events that I was sure were massive mistakes and failures, and how they led to something more substantial.

Sometimes the events in our life that are not necessarily easy, are the most necessary.

That’s why I’ve written articles like 9 Signs You’re 20s Aren’t Going as Planned (and why that’s a good thing) or The Benefits of Having a Quarter Life Crisis. Because I learned, mainly while complaining and grumbling, that my plans weren’t that amazing to begin with. Only by my “amazing” plans going up in flames could a better, more substantial plan be written.

I’m still trying to learn that sometimes it’s those annoying fleas of life that end up saving my own.

Betsie Ten Boom wouldn’t survive the holocaust camp during WWII, but her hope and vision would inspire her sister Corrie ten Boom to keep fighting and find a way out, sharing their story in one of the most powerful books I’ve ever read The Hiding Place.

Also in an unbelievable collection of events, Corrie continued Betsie’s vision for creating a massive post-war mansion that would be a place of healing for those brutalized by the war — both for the victims and for those who had inflicted the pain.

Most times we can’t see the full picture. Can we give thanks for the parts that have yet to be revealed? How would that change our perspective and our lives if we did?

What would happen if we found purpose and redemption, not in spite of the pain, but smack dab in the fleshy wound of it?

“Every experience God gives us…is the perfect preparation for the future only He can see.” – Corrie ten Boom

What can you give thanks for right now even if there doesn’t seem to be anything right now to be grateful for about it? I’d love to hear about it in the comments on this article.