3 Signs it is Time to Make a Big, Scary Change 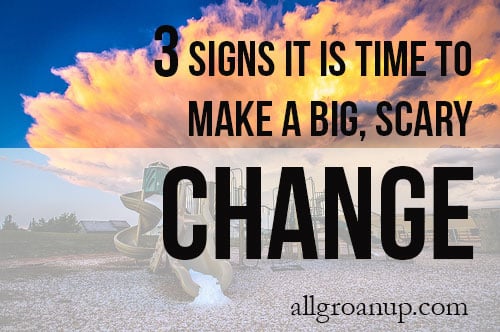 Change can be freaky.

For me it’s right up there with the fear of something crawling up my leg in the middle of the night. Or going to a stadium, thinking I’m watching a basketball game, only to be tricked into seeing two-hours of Stars on Ice.

However, change can also be something we become addicted to.

We never stick anything out because we’re always on the elusive search for “perfect” — perfect job, perfect relationship, perfect neighborhood, perfect church, you name it. Then we realize that these places are filled with people, including us, so perfect is far from possible.

1. When you’re swimming in a toxic cesspool of swirling crazy

Have you ever been in a job, relationship, or life situation that has felt like you’re trying to swim upstream in a swirling cesspool of toxic crazy? Well, instead of paddling furiously and putting your head back in the water, maybe it’s time to swim for shore and get the heck-on-out of there.

Sometimes we become so used to the swirling sickness that you can’t even smell it anymore. Especially in dating relationships. Relationships can be the trickiest one to spot the crazy.

I was once in a relationship that I was becoming increasingly sure it was something special. And she assured me she felt the same. Then months later I would find out she was assuring her ex-boyfriend the same thing, as she preceded to date us both.

Sometimes the feelings of love can blind us to the real nuts and bolts of it.

That’s why I wrote in 101 Secrets For Your Twenties, “Love is blind. Enlist some seeing eye-dogs.”

Ask your trusted friends and family if they think it’s time to make a change.

Or instead of asking yourself “is this The One”, ask yourself these 15 crucial questions when dating instead.

If you’re paddling around in a swirling cesspool of crazy, it’s time to swim for your life.

2.  When the Direction is Leading You the Direct Opposite of Your Destination

Are you on a path, a well-paid path where you’re making great momentum, yet you’re going the exact opposite direction you want to go?

This can be the toughest, scariest, and most courageous change anyone can make–when everything on the outside is telling you that you’re doing amazing, yet the real stuff on the inside is trying desperately to get your attention.

We all go down unexpected paths that are full of twists and turns, where we don’t see exactly how it will all end up. Yet, we know it’s headed in the general life direction we want to go down. That’s not the path I’m talking about here.

I’m talking about the path where you know exactly where it’s headed and it’s not where you want to go. Yet, to leave it would be a sacrifice of finances, comfort, and the collection of cool stuff you take pictures of for Facebook.

Making a change to un-wedge yourself out of something comfortable is far from comfortable.

“Change is hell. Yet not to change, to stay on the path of slow death, is also hell. The difference is that the hell of deep change is the hero’s journey.” – Robert Quinn

The most dangerous job you can have is a comfortable one that is slowly floating you away from the things that are truly important to you. The longer you stay in, the harder it is to escape. And the closer you get to the waterfall up ahead.

As I wrote in 101 Secrets For Your Twenties, “There is a stark cost for time wasted on comfortable.”

Honestly, that’s never been the definition of adulthood that I’ve wanted to base my life on. I want to live my life where I’m serving the world my Signature Sauce – the unique mix of ingredients inside of me that gives the world a flavor no one else can. What about you?

3. Here’s the first, most crucial part, to making a big change…

Before making a big external shift, what internal changes do you need to make so that you don’t make a change that puts you right back into the same situation as before, but just dressed up in different clothes.

Yet, you change jobs. You get divorced. You get hired somewhere else. You re-marry. Then you find yourself just as miserable as before.

Because maybe you’re always fantasying about some big change that’s going to fix everything, when the real, hard, needed change starts with you and the monsters you’re trying to pretend don’t exist in the back of your closet.

Change can be hell. But if you are willing to make the deep changes in you before you change your circumstance, those are the changes of the hero’s journey.

Unless you’re drowning in a cesspool of crazy. Get out of that first, change the atmosphere. Lay on the shore for a while. Then work on what changes you need to make–mentally, emotionally, spiritually–so that you don’t jump into another cesspool of crazy just a little further downstream.

Sometimes all you can do is surrender to change. And just let it rain.

Do you feel you need to make a change? I’d love to hear from you in the comments on this article.

This powerful song sung from Koryn Hawthorne on The Voice last season describes that fiery fury of change better than I can.