What Story Are You Living? – #19 A Million Miles in a Thousand Years 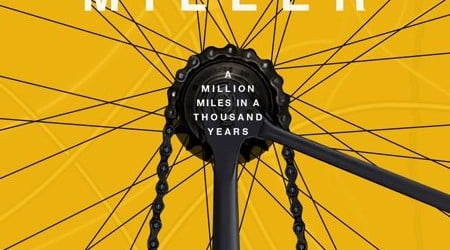 I first knew A Million Miles in a Thousand Years was a needed book for twentysomethings to read when one of my best friends told me he quit the job that sucked the life out of him like that vacuum that can pick up a bowling ball.

He was quitting and moving to Europe and didn’t exactly know when he’d be back. After years of late night conversations about needing a change, I asked him what finally made him do it and he responded with an excitement in his voice I hadn’t heard in a while, “I realized I was living a pretty awful story and I needed to write a better one.”

He had been reading A Million Miles in a Thousand Years by Donald Miller.

Now I could describe to you a piece of strawberry cheesecake. I could wax poetic about the layers, crust, sunlight traipsing across the red luscious strawberries….or you could grab a freaking fork and take a bite of it yourself. That’s the way  I feel about trying to describe #19 on the 20 for Twentysomethings countdown: A Million Miles in a Thousand Years by Donald Miller.

The story of A Million Miles is about “story” –  about how the story lines that make a great main character in that great movie is the same that make up a great life (well minus the million dollar special effects, even though a car chase or two would sure spice up a Monday). The tension, the suffering, and the obstacles all leading towards something much bigger than themselves – it all has to be there for the story to actually mean something. For the audience to be so moved that they all clap and cheer together when your story is over and the credits start to roll. Or else, they might shuffle out quietly wondering if they can get the last two hours of their life back.

The main way A Million Miles in Thousand Years struck me was the way Donald Miller danced around this idea that many of us are waiting to act the lead role of our own stories. Literally, sitting at home, smoking a cigarette, hoping our agent will call. We want God to write some heroic scenes where we get to rescue the girl, make a million, kiss the girl, save the bus full of kids from the upcoming cliff while we’re on the phone making a few more million, and then relax on a tropical island (which we own) drinking Mai-Tai’s. That’s the story we want delivered to us. We want God to call us and say “Shower and shave! I’ve just written the story you were born to play.”

And then, when seemingly God forgets our number. Or when we starting living out our day-to-day where all the heroic scenes are apparently re-written with 50 unbearable pages about going to the office and drinking bitter coffee. Or falling in love with someone who seems quite content in loving someone else. Well then we become angry and start eating more Hagen-Daaz. And why shouldn’t we? Because either:

A. God is a terrible storyteller.

B. God is a sick, twisted being who gets his kicks out of watching us suffer.

He’s either incompetent or cruel and sometimes we think it’s a little of both – so we lose hope.

However, in Donald Miller’s profound and poetic way A Million Miles in a Thousand Years shows us that God doesn’t want us to be just actors in our own life, hanging out in our trailers smoking a cigarette waiting for Him to write a scene worth our time. No, God wants writing partners. He wants us to pull up a chair, a cup of coffee, and create with him. He wants us to stay up until 3 am going through the painful, laborious, exhilarating process of working with him on our own life script.

Sure sometimes the story might take on a life of it’s own, but ultimately he wants us to ask and wrestle with the question that is the driving force behind every great story – what does this character really want? What do I really want? Seems a simple enough question, but it’s not. I know having wrestled with that question for five years in my own story: All Groan Up: Searching for Self, Faith, and a Freaking Job!

God wants us to banter back and forth with him, dream the next plot line – heck, even argue with him about what should happen next because we’re so passionate about the story we are writing together.  So are we going to watch our own lives with a bag of popcorn and then complain when the lights go out because the end didn’t turn out like we thought it should? Or are we going to help write the dang thing?

Life will ultimately be much more freeing to us and to those around if we pull up a chair to that blank page and ask, “All right, so what needs to happen next?”

Want to hear Don Miller describe it himself? Watch the video below.