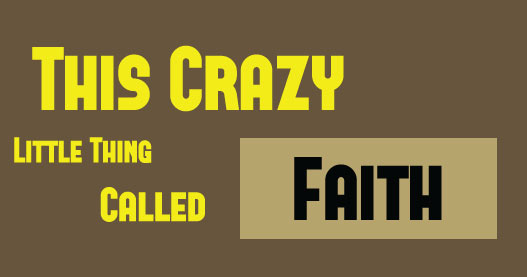 I’d made it halfway through the church service, before I slipped out the back door and was briskly walking to my car. As I hurriedly traversed the Land of Church Parking Lot, I had this fear that someone was following me. That someone was going to tap me on the shoulder and say, “Come back inside brother. There’s no need to run away.”

However, as I grabbed the handle to my Honda, no one was there to pull me back. No one knew I’d come to the church service in the first place. And no one cared that I’d left mid-sermon.

I was anonymous. It was cleaner that way.

Because at 24 years old, I wasn’t sure if I was ever coming back.

On the Outskirts of Faith

In my mid-twenties, my faith had moved to the outskirts of town next to the trailer park and three-legged squirrel refuge. And I didn’t have the desire or courage to go looking for it.

Sure, growing up God and I were gung-ho on each other. And I in turn did my best to say and do all the right things. All the way through college, God and I had this kind of secret, binding agreement. I followed him. And he in turn would bless me.

It was a match made in heaven.

But somewhere after college, one of us broke the agreement. And while I knew it was most likely my fault, God had to be partially to blame. Because amidst crappy jobs, broken dreams, and a life going nothing like I planned, my discouragement turned to doubt.

And that doubt slowly turned to anger.

Well if God doesn’t care, then why should I?

A fire started to burn within me. Not the metaphorical fire that motivates great people to do amazing things.

No, my fire was the one that devours. That burns down villages and forests as fury little animals run for safety.

Pain all around me, flames burning my arm hair, I left and began to find a way out. Me and only me. It was my fire-escape plan. Since I felt God led me into the flames in the first place, I wasn’t about to trust him with leading me out.

As I write about in my new book All Groan Up: Searching For Self, Faith, and a Freaking Job! after years of running, and escaping, and trying to dose my pain with anything but God, I was on a free fall for rock bottom. But a strange thing happened.

Instead of rock bottom, I found a rocky ledge of grace.

I learned that along our fall towards rock bottom, God gives us ledges to crash onto. Ten, fifteen, twenty feet below. He won’t let us fall all the way to our death. He’ll give checkpoints along the way.

So you crash onto His ledge. It’s still painfully hard ground—you just fell a shorter distance to get there.

You land broken, but still breathing.

I’d made a thousand mistakes. There was a long list of casualties of people who I’d hurt along the way. But laying there on that ledge, I experienced something that was so radical and out of place that I had to take note.

I had no trophies to present him. I had no accolades to make him proud. I’d broken my end of the deal. Yet, God loved me. He had never stopped.

The Furious Longing of God

The “Furious Longing of God” is the title of a Brennan Manning book and I can’t describe it any better way.

But if I was going to try…my one month baby girl just threw up in our bed this morning at 4 am. I was planning to get up at 5 am to try and write, but there’s no better alarm clock than a puking baby, so I decided 4 am was as good a time as any.

But as I began to write, the baby began to cry again and I picked her up out of the room to try and settle her down.

And there, having just been puked on, and extremely tired, and trying to be productive and write profound things, none of that mattered as I held my baby girl. She looked into my eyes. Her hand touched my chin. Twice. And I was in love.

But the thing is, just minutes before, when she was throwing up in bed, I was just as in love then too.

No matter our mistakes. Or wrong turns. Failed plans. Heart-breaks. Shattered dreams. Or times throwing up in bed.

(There is definite space and time limitations of a blog, so I will mention that I go more in-depth into this story in my book — All Groan Up: Searching for Self, Faith, and a Freaking Job! )