The Creative Manifesto (why we need to create) 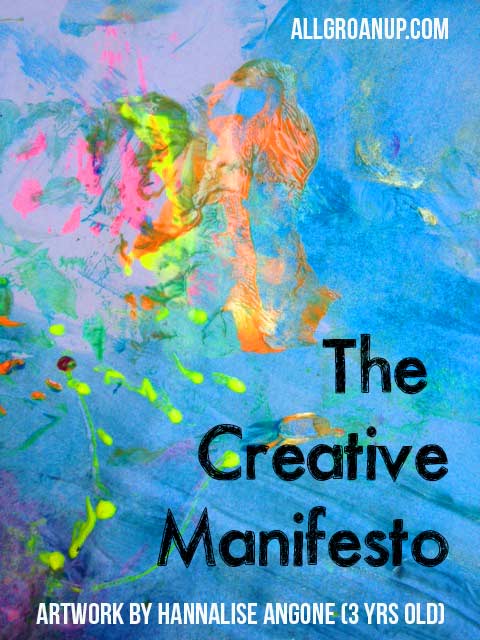 “On such a flat earth, the most important attribute you can have is creative imagination.” – Thomas Friedman

Will you have the courage to create?

It’s a choice that asks you to fully be you. In business, art, writing, relationships, parenting, working a crappy job, cooking, wherever life finds you, your success will hinge on how creative you will allow yourself to be.

I choose to create. Here is what I stand for. Will you join me?

“Art involves labor. Not the labor of lifting a brush or typing a sentence, but the emotional labor of doing something difficult, taking a risk and extending yourself.” – Seth Godin, Linchpin

“Giving the Liar authority to speak truth into my life is as insane as letting a wrecking ball build my house.” – 101 Secrets For Your Twenties

“You write your first draft with your heart and you re-write with your head. The first key to writing is to write, not to think.” — Sean Connery

“Complaining is passive and powerless. Creating is proactive and powerful.” – 101 Secrets For Your Twenties

“God is really another artist. He invented the giraffe, the elephant and the cat. He has no real style. He just goes on trying other things.” — Pablo Picasso