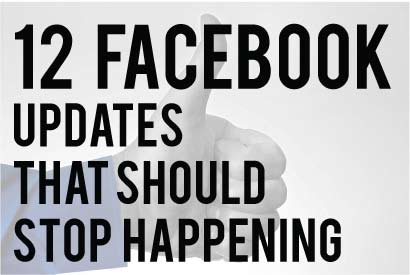 There’s no quintessential Facebook Guidebook. And other than posting pictures of your kids, your pets dressed as kids, food pictures, inspirational quotes and the occasional friend-stalking, I’m not quite sure I know what Facebook is supposed to be for.

But I do know I’ve had a few Facebook updates I’d like to have back. And with the Internet’s Ironclad Memory that’s sometimes easier said than done.

So with the goal of making Facebook Friends, not Facebook “Hide Them From my Feed”, here are the twelve Facebook updates that should probably stop happening.

Giving the dollar amount of your last commission check or Shamu of a Deal you just landed, followed by a Cha-Ching and/or Holla at Me, doesn’t cement many Facebook friendships. Yes, you dry yourself in $100 bills. That’s awesome. I use a towel I haven’t washed in two weeks. So…

If you talk a lot of Ish on Facebook it makes me wonder about the incredible amounts of Ish you must talk when the world can’t see your every word.

Typically taken in Vegas or some sort of waterfall/beach scenario, I’m pretty sure there’s a better way to tell the world you’re ready to start fielding offers once again than the “I’m Single Again” Facebook picture.

I hope you get better. Honestly, I do.

And I’m all about authenticity and openness. Honestly, I am.

But when you start getting all Dr. Detailed on me, reminiscent of Awkward-Day in Freshman Health Class, I want out. When something gets lanced off your body, leave it there and off your Facebook.

Oh, your friend who you haven’t talked to since Mrs. Wilson’s class just tagged you in a picture. What could it be?

Oh, they’re starting a dance studio for kids and have gracefully tagged you in their promo pic. Sign my kid up.

Oh, your friend from Mrs. Wilson class tagged you again. Oh crap. This time it’s real! All the acne, braces, and bad sweaters you’d successfully removed from your memory, now in the world’s hands. I take it back, I’ll enroll my kid in your dance studio for five years. Just take down that Facebook pic!

Yes, searching for a job is a tough, thankless gig. But complaining about it everyday does not make your Facebook friends want to help you find a job.

Yes, life in our twenties can mean working a lot of crappy jobs. But complaining about it daily on Facebook definitely doesn’t make a Non-Crappy Job want to lure you in their direction. Because they know if they hired you it would be just a matter of time before you’re complaining about them too.

If anything has laid eggs in your house, leave the descriptors for the exterminator.

Yes I know some are ready to debate me right on Facebook for this comment. And I know for some people a ripe political debate on Facebook is like Christmas come early. And I know countless people can equate changing their life-long belief system to a heated back and forth Facebook chain. But maybe these kind of deep, complex conversations are better for, you know, in person.

Yes you are at a Toga party for the first time. Yes there are scantily clad people all around, including yourself. But call me Barbara Bush and put a shawl around my shoulders, I don’t think you should necessarily post 55 pictures documenting the whole night. The Long Arms of the Internet doesn’t let you bring those Facebook pictures back.

Every hour on the hour.

I would love to hear your thoughts below. What Facebook updates do you wish would stop happening?