101 Secrets for your Twenties Giveaways, Parties, and Pictures 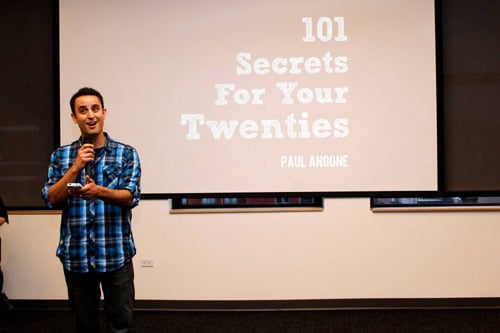 A week ago 101 Secrets for your Twenties released and in 14 hours sold out on Amazon.

That couldn’t have happened without you. Thank you for continuing to be a huge part of this story.

And as I’ve gone this week from LA, to New York, Chicago, and Portland I’ve been amazed and honored by the positive and encouraging reviews I’ve received from you in person and online. 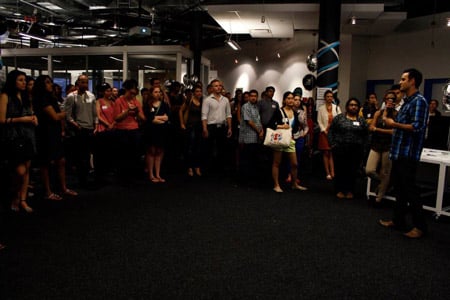 Speaking in NYC at the Wix Lounge

But the book definitely still needs your help. It’s in that awkward in-between stage where it either takes off and flies, or plummets to the ground.

Here’s three simple ways how you can help:

1. Buy the book on Amazon and/or Barnes and Noble, and tell your friends and influencers you know to do the same. If you buy before July 11 and email me your receipt, you will be entered to win a free iPad Mini or Kindle Fire that my publisher is giving away. Seriously. For every book you buy, you’ll be entered to win. Four other people will also win $80 in gift cards.
2. After you read the book, leave a review on Amazon and Goodreads. Even if it’s just one sentence. Each review plays a huge role in helping the book become more visible on Amazon.
3. Watch and share the Stuff Twentysomethings Say video aka the “101 Secrets for your Twenties” book trailer. It’s funny and is beginning to climb the Youtube ranks.

I’m doing everything I can on my end to see the book soar and have just gone through an exhausting, exciting week with book launch events, radio interviews, book signings, etc. in LA, New York, Chicago, Portland – with the last trip to Denver ahead. (If you’re in Denver, here’s the details).

At one point I was running on a total of 13 hours of sleep in four days and I couldn’t have been doing better! (well, other than the sheer deliriousness).

The 101 Secrets pre-release party in LA on Saturday night was unbelievable. It was a surreal honor to have a gallery full of amazing people all there to celebrate this book.

My wife and I stayed up until 2 a.m. the night before putting the finishing touches on our 101 Secrets for your Twenties 16 by 10 foot, yarn, nail, paint 3D book cover, which served as an awesome photo-shoot backdrop. How do you like it?

There’s no way this book happens without my wife’s support so it was awesome to celebrate this together with our family.

Then we packed everything up, got out of the venue at 11 p.m., drove home, unpacked everything, went to bed at 3 a.m., woke up at 6 a.m., (have I mentioned my wife is insanely amazing) and drove to the magical land called Los Angeles Airport where the line for Southwest check-in went through the lobby, snaked outside, and ended somewhere around the Santa Monica pier.

Next up came the small rural town called New York City where I teamed up with website builder Wix.com, the NY Creative Interns, and the one and only Jenny Blake, to throw an epic launch extravaganza celebrating the launch of Jenny’s new website JennyBlake.me and the release of 101 Secrets. The Wix Lounge was filled with hundreds of amazing people and I couldn’t have dreamed a more perfect launch party for the day of the book’s release. 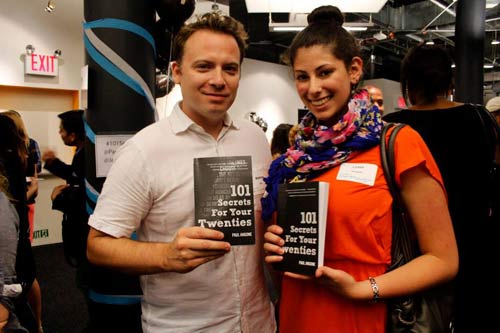 A HUGE thank you to Wix.com and NY Creative Interns for their amazingness in helping make this event a smashing success. Thank you Jenny Blake for the honor of co-headlining an event with you. Then as well thank you to all the guests who braved the rains and snagged a copy of the book. I’ve never signed that many books at once in my life! 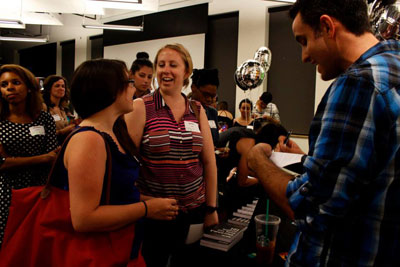 Then after the party, 101 Secrets for your Twenties even found itself even being prominently displayed in Times Square!

The next day it was up at 5:00 a.m. to barely catch the train to Newark, to barely catch my flight to Chicago. Then I was back at it again, this time speaking at Enerspace Chicago to the 20Something Bloggers community about the book, and then tips on how they can turn their blog into a book deal. Another night, another amazing experience. Not too shabby of a view either. 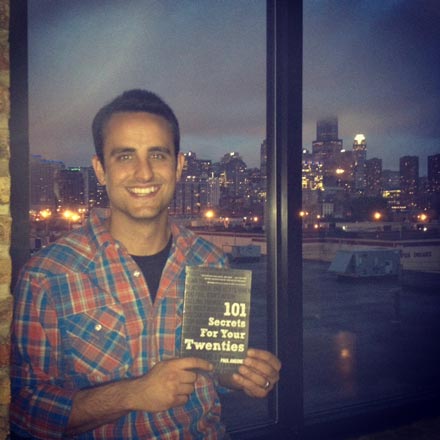 Also snagged an hour long live interview with Chris Fabry! Thanks for having me on the show Chris. A great interview! 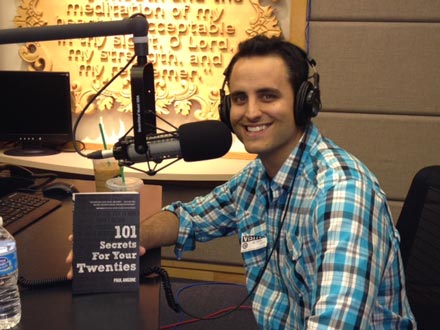 Then it was off to Portland to team up with Jenny Blake again for a picnic in the park with around 60 people swinging through to snag a piece of pizza, a book, and a donut covered in Fruit Loops. What could be better? Amazing connecting with fans and new friends. 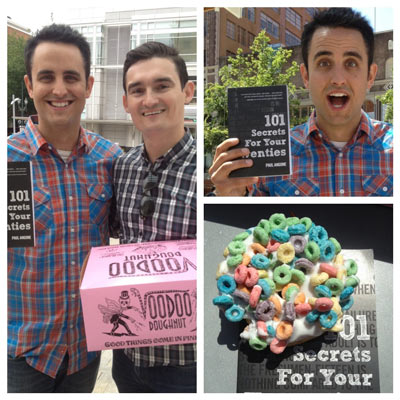 If you haven’t gotten a chance to watch the 101 Secrets for your Twenties Book Trailer, here it is.

101 Secrets for your Twenties Reviews and Interviews

Not convinced on the 101 Secrets for your Twenties hype? Don’t take my word for it. I’m biased. Check out some of the amazing reviews and interviews that have already hit the Interwebs. Thank you everyone who has written a review. If you’ve written one and don’t see it on the list, please let me know at paul[at]allgroanup[dot]com. 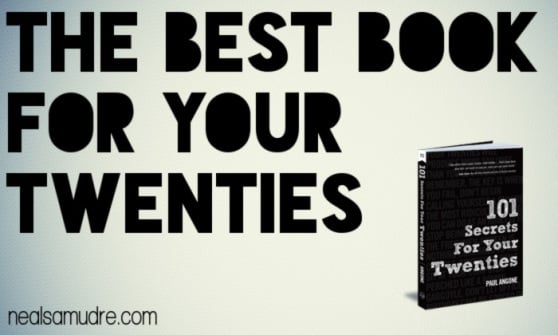 It’s been an eight-year dream to see this book happen. I can’t thank you enough for your help, support, and encouragement along the way. Please help me in sharing its message on Twitter, Facebook, Instagram Pinterest, etc. Here’s the book on Amazon and Barnes and Noble.

And if I ever have the pleasure of meeting you in person I’m thanking you with a great big hug.

Too much? Maybe a handshake then?

Let’s make 101 Secrets for your Twenties the worst kept secret in the world.

I’d love to hear from you in the comments below:

Have you purchased and started to read 101 Secrets?

What’s been your favorite secret?