The Many. The Humbled. The Unemployed. 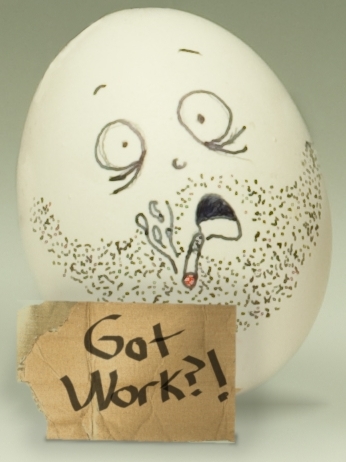 For a long time, I was an Unemployed. I won’t say exactly how long I was such; just that it was longer than William Henry Harrison’s term as President and shorter than James Garfield’s. (Thank you Wikipedia.)

One day you’re confidently standing on – the next, you’re laid off. Your obvious expendability, slightly humbling. Like not playing in the playoff game and your team still winning 54 to 7 without you.

But hey, us Unemployed, we didn’t like our job that much anyway, right? Yes, maybe being an Unemployed is one of those blessings in disguise, an open window next to a closed door, a glass of lemonade produced from our severance package of sour lemons. Maybe we’ve been given exactly what we’ve prayed for all along – our life back!

We are our own boss now! Sure we don’t pay well, but we have our freedom.

Now we have time to finish all those projects – clean out the garage, complete that scrapbook, and finally write that article for our favorite website.

Better yet, we can even start constructing that novel, hammer out that business plan, or find that lead guitar player for our band.

Yes, maybe this unfortunate termination is going to be an unfortunate, fortunate. Maybe God does have his hand on this, working all things out for good like we’ve been promised. Years from now we’ll look back at this time in our lives and say, (on our interview with Conan O’Brien, after our book/band goes international) “You know Conan, it’s funny. Life really began the day I got laid off.”

But if there’s a “heads” on one side, there’s a “tail” on the other. And unfortunately around the month-unemployed, still-can’t-find-a job anniversary, the tail hits a growth spurt.

First, your ad on Craigslist for a guitar player only gets two responses. One from a thirteen year old who plays the violin in his music class, Tuesday and Thursday. The second from a guy named Rosco, who doesn’t seem to really play any instrument whatsoever, but desperately wants to meet in person to “figure it out from there.” Umm…

Then someone asks you for the 49th time, “Soooo…what do you do for a living,” making sure to ask just loud enough for everyone to hear. A question which makes you grimace, forcing you to put on that conversational magic show once again as you attempt to pull a rabbit out of your hat that died two weeks ago.

Now it’s 2:30 PM. On a Tuesday. You’re prostrate on the couch, watching that Saved by the Bell DVD set you secretly own, getting angrier with every episode because how can Screech be on television for ten years and I can’t even get hired at Starbucks!!! Where’s that bottle of wine! (I might be speaking from experience here.)

Yes, being an Unemployed begins losing its luster, the shine turning quite dull. You can never truly relax, because you don’t feel like you’ve ever done anything worth relaxing from. Discouragement, Depression, and Despair begin silently following you around like three sick dogs, jumping on your lap whenever you sit down.

“God, why have you forsaken me? You saved the lepers, tax collectors, and prostitutes. Now please God, save me – an Unemployed!”

However, after watching Disc Four of my Saved by the Bell set, I had this thought:

Why in the world did I think this was going to be easy? Why did I think people would lavish praise on me throughout the job-searching process, as I took one gritty, unglamorous step after another? I forgot that we praise perseverance only after someone has completely and officially persevered.

Perseverance is doggedness. It’s a steadfast and long-continued application, action, and belief in spite of difficulties, obstacles, and discouragement. It’s continuing forward, one simple step after another, with shoes smothered in drying cement.

I need to keep moving forward, get creative, and look for ways that my course is changing. Perseverance doesn’t necessarily mean continually running head first into that brick wall, if there’s a half-open door to the right. Perseverance means an unwillingness to not hope. To refuse disbelief.

Maybe you’re not even unemployed. With so much shifting around us – in the church, the nation, our world, you don’t have to be unemployed to be suffering. But in this time of 7.5-Richter-scale-shaking, let us hold tight to Hope.

God save us: the Many, the Humbled, the Unemployed.