Countdown of the 7 Most Awkward Coworkers 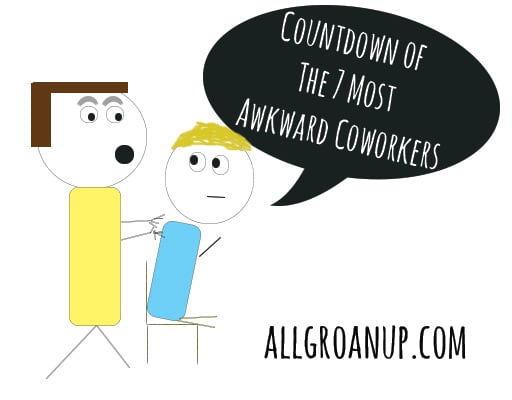 Awkward and coworkers go together like bad coffee and a break room.

Why is that? Why is there so much awkward at work?

Maybe it’s because the maze of rainy-day-gray cubicles are set up like a D minus science experiment thrown together the night before the science fair.

But the best part about having awkward coworkers? You have no idea just how awkward they until you’re fully employed. And there’s no escaping them!

“What was that, Henry?”
“The report is probably going to be eeldphterent…
“I’m sorry, I didn’t catch the last part.
(sigh) “I said probably it’s an elephant monkey tattoo in the cupboard.”
“Did you just say elephant-monkey tattoo?

And that right there is the best part about the MumbleCore— their sighs and rolling eyes are the only two things you can hear every time. Without fail. 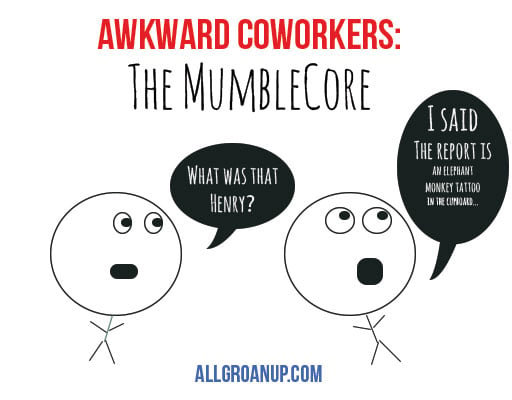 You got a story you think is somewhat amusing?

The One-Upper is ready to pounce at the first sign of a pause.

You saw three deer cross the street? He saw nine deer being chased by a mountain lion.

You tripped down three stairs and cut your hand? How cute—he tripped down an escalator and was in the hospital for a month. 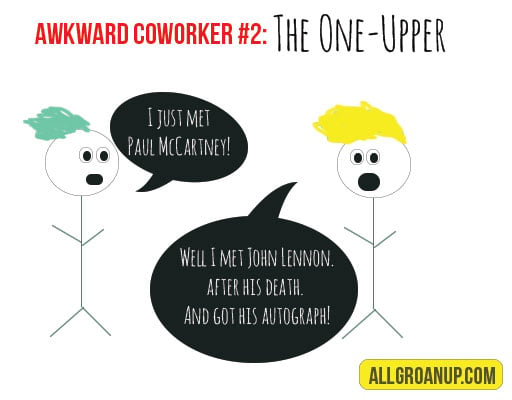 You know they are browsing the internet all day.

They know they are browsing the internet all day.

Yet when you walk over to their desk, they click away faster than Billy the Kid at a shootout. 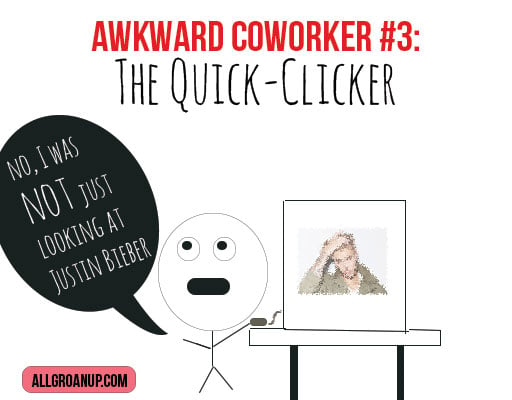 You’ve been attacked by the Shoulder-Rubber.

They find the moment you’re most focused, sidle up behind you, and start rubbing. Or they just leave both hands on your shoulders for an awkward amount of time with no rubbing whatsoever.

Your best line of defense?

Hunker down and pretend the report you’re working on is so engrossing that you don’t even notice those hands are there. 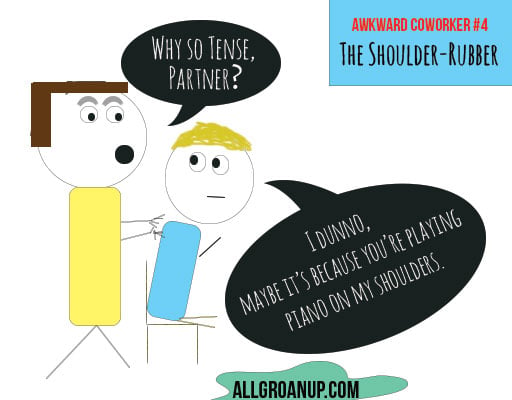 Walking from their desk to yours takes exactly 23 seconds, if there’s heavy hallway traffic. But the Email-Only wants to keep human interaction at a bare minimum, especially if they disagree with you.

If they ever do talk to you in person, they’re kind and shy, agreeing with everything you say.

Then the moment they’re back at their desk, they unleash a monster through each finger tip, deconstructing your idea, and your soul, in four sentences.

And if you’re really lucky, they’ll cc half the office as well to make sure your idiocy is known across all of Cubicle-Land 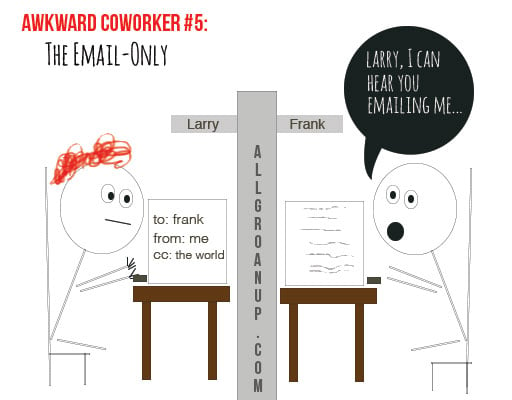 Got an idea? How nice.

The “That Won’t Work” has five reasons your great idea is worse than filling your pockets with ham before walking into a lion’s cage.

For every idea. You’ll ever have. Forever. 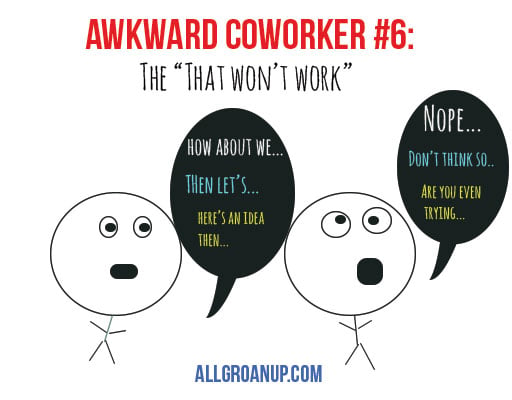 He has no sense of beginning nor end.

The Lingerer lives, breathes, and has his being in the nexus of your doorway, never knowing when to say hello or when to wave goodbye.

So he stands. Obviously yet inconspicuously. Weight on his left foot, hands firmly stuffed in his pockets as he intensely studies the picture of an elm tree on your wall like he hasn’t examined it 332 times before, hoping that someone else will make the first conversational move.

You continue typing, pretending that you don’t see him and if you don’t finish your email in the next minute the world might EXPLODE!.

But the Lingerer knows your game. He’s the 8th grade guy who figures if he just hovers next to a girl long enough, maybe she’ll just ask him on a date. 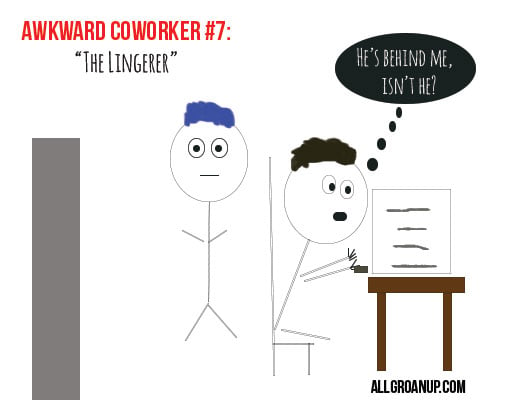 But the thing to remember is—the Lingerer or the MumbleCore, yeah, they think you’re awkward too.

And you know what, they’re probably right.

We all have our awkward uniqueness that makes us, well, us.

Quirks are like birthmarks—you live with it for so long you kind of forget its there.

But gosh, 40 hours in the office would be boring if we didn’t have the awkward to spice it up.

When you leave this office and start a new job, it might be the amazing awkwardness you remember the most.

Did I miss any awkward coworker types that you think should be on this list? Or have you ever run into one of these coworkers listed above? I’d love to hear your story (no names included) within the comments in this article.

All cartoons were designed by me, Paul Angone. Any resemblance to any real persons is purely coincidental. Except for you Zack.